ISIS: Common Enemy of Iran and the United States

ISIS: Common Enemy of Iran and the United States 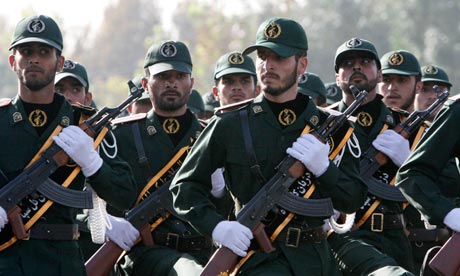 The Iranian Revolutionary Guard Corps
The advance of ISIS into Baghdad is on hold at the moment in part due to resistance from the Iraqi military and Shia militias. On Sunday, theWashington Post reported:

An Iraqi general told reporters in Baghdad that the armed forces have “regained the initiative” in recent days and are confident that Baghdad is secure. As part of the effort to protect the capital

, soldiers headed into the desert to dig a trench, according to footage broadcast on local television stations.

Sure, that oughta do it. More to the point, at the Daily Beast, Eli Lake and Tim Mak think the United States can make quick work of ISIS.

President Obama has so far turned down Iraqi prime minister Nouri al-Maliki’s request for U.S. air strikes against the Islamic extremists taking over his country. But if Obama changes his mind, U.S. jets could be flying over Iraq in less than a day.
U.S. air bases, housing dozens of American fighters and bombers, are well within striking distance of Iraq. High-flying spy drones like the Global Hawk can just as easily fly over Iraq as Afghanistan or any other conflict zone in the region. The aircraft carrier U.S.S. George H.W. Bush is a few days’ sail away, in the North Arabian Sea. And it boasts dozens more fighters on board.
That’s why a number of retired high-ranking U.S. Air Force officers, including Lt. Gen. David Deptula, who served as the Air Force’s first deputy chief of staff for intelligence, say any strikes, if ordered, could begin almost immediately.
“If you can provide me with the appropriate intelligence we can start doing (air strikes) within 24 hours,” he told The Daily Beast.

Down, boy. Meanwhile, on Thursday, in an article that garnered widespread attention, the Wall Street Journal reported that, with ISIS gaining territory

The involvement of Iran would pose yet another security challenge for the White House, and raises the prospect of the U.S. and Iran fighting on the same side. The U.S. opposes Iran’s support for Syrian President Bashar al-Assad, but with Tehran is jointly supporting Iraqi Prime Minister Nouri al-Maliki.

But, wrote Juan Cole at Informed Comment on Friday:

The specter of Iranian troops on Iraqi soil can only recall the first Iran-Iraq War.

In the looming second Iran-Iraq War, the US will be de facto allied with Iran against the would-be al-Qaeda affiliate (ISIS was rejected by core al-Qaeda for viciously attacking other militant vigilante Sunni fundamentalists in turf wars in Syria). The position of the US is therefore 180 degrees away from what it was under Reagan.

In the end, as the New York Times reports, ISIS

… has exploited widespread disenchantment among the country’s Sunnis with the government of Prime Minister Nuri Kamal al-Maliki, to align with other Sunni militant groups, such as one organization that is led by former officers of Saddam Hussein’s Baath Party.

Still, it would provide the United States and Iran another area of nascent cooperation, along with the nuclear talks.
Postscript: In the post cited above, Juan Cole gave us the best description ever of the difference between Shias and Sunnis.

Shiites are more like traditional Catholics in venerating members of the holy family and attending at their shrines. Contemporary Salafi Sunni Islam is more like the militant brand of Protestantism of the late 1500s that denounced intermediaries between God and the individual and actually attacked and destroyed shrines to saints and other holy figures, where pleas for intercession were made.http://fpif.org/isis-common-enemy-iran-united-states/