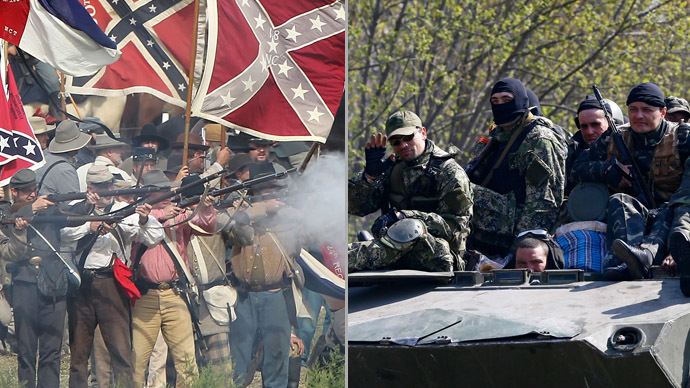 Historical analogies may be inaccurate, but Americans may need to look at their own civil war and compare it to what is happening in Ukrainenow. Today the US supports a murderous criminal adventure that has little to do with unifying the country.
This assessment came from Professor Stephen Cohen, prominent US scholar ofRussian studies and author, who advised George H.W. Bush in the late 1980s. Hespoke to RT about the mistakes of the consecutive American administrations in their Russia policies, the worst crisis in decades that they led to and the deterioration of political discourse in America that prevents things from changing in Washington.
Cohen challenged the narrative of the Ukrainian events dominating in the US, calling the military crackdown by the government an “unwise, reckless, murderous, inhuman campaign that Kiev is conduction against what are admittedly rebel provinces.” Stephen Frand Cohen
“Lincoln never called the Confederacy terrorists,” the scholar pointed out. “He always said, no matter how bad the civil war was, fellow citizens he wanted to come back to the union. Why is Kiev calling its own citizens terrorists? They are rebels. They are protesters. They have a political agenda. Why isn’t Kiev sending a delegation there to negotiate with them?
“Their demands are not unreasonable. They want to elect their own governors – we elect our own governors. They want a say on where their taxes go – ‘no taxation without representation.’ We know what that is,” Cohen said. “There are extremists among them, but there are also people who simply want to live in a Ukraine that is for everybody. And instead the Kiev army, with the full support of the United States, is supporting this assault.” A man looks at a residential building, where he resides, which was damaged by what locals say was overnight shelling by Ukrainian forces, in the eastern Ukrainian town of Slaviansk June 12, 2014. (Reuters/Gleb Garanich)
‘Kremlin an essential ally Washington pushes away’
What the US doing with Ukraine now is alienating arguably the best potential ally it has now, Cohen said.
“I am convinced that the most essential partner for the American national securityin all of these areas from Iran to Syria, Afghanistan and beyond is the Kremlin, currently occupied by Putin. And the way the United States has treated Putin – I would call it a betrayal of American national interest.”
Russia helped the Obama administration save its face in Syria, where the president was pushed into bombing the country over chemical weapons. It helped make bridges with the new leadership of Iran to start the first serious negotiations in decades.
“Obama had within his grasp at last – because it was a failed foreign policy presidency for Obama – two achievements that would have been in American national interest. And they have slipped away almost in proportion to the degree that Obama pushed Putin away. Pushed Putin away so far that over Ukraine we [the US] could be on the verge of war with Russia.” U.S. President Barack Obama and Russian President Vladimir Putin (Reuters)
Cohen blames the US, particularly the Clinton administration for setting the world on a path that led it to the current confrontation between the West and Russia.
“This is the playing out of American policy of expanding NATO to Russia’s borders – for whatever reasons. It began with Clinton, was continued under the second George Bush, has been pushed by Obama. And that is the rooster that has comehome to roost.”
“Some people in the 1990s… warned that this was going to happen. Now that it has, and the people would not take responsibility for it,” he said. “They would not say ‘OK, we were wrong, we have to rethink policy.’ Instead they say to people such as myself, ‘You are an apologist for Putin. You are serving the Kremlin, you are not a patriot.’”
‘Obama isolated himself on foreign policy’
This lack of ability to change policies is evident in the current administration, the scholar believes.
“I had lunch with two men much older than me, who had served many presidents and who’ve known them personally. And they were agreed that this president more than anyone in their lifetime isolated himself on foreign policy.”
One anecdotal example Cohen cited is Obama’s refusal to talk to former Secretary of State Henry Kissinger.
“I have heard – whether it’s true or not I don’t know – that President Obama has declined to meet privately with Henry Kissinger, who sees Putin twice a year. Kissinger probably knows Putin better than any American statesmen alive today and who has been consulted by so many presidents. Think what we might about Kissinger’s past, but he has already declared his criticism of American policy towards Russia. And Obama wouldn’t want to spend an hour with him, asking ‘Are we doing something wrong? Are we misperceiving the situation?’”
It’s no surprise that a leader, who doesn’t take into account various viewpoint on a problem cannot take a rational decision on tackling it, Cohen said.
“I ask for a president to be a person, who solicits the best and most diverse learned views involving an existing crisis, that’s all… A president has to bring in people with conflicting views whose legitimacy is based on their knowledge, their learning. A president who doesn’t do that is going to get us into a crisis that Obama and Clinton got us into.” Former U.S. Secretary of State Henry Kissinger (Reuters)
‘The only way to break orthodoxy is with heresy’
Unfortunately for America, it’s not only the White house that discourages debate now, but also American society in general, the professor said.
“There is no debate of public opposition in this country about this, unlike the situation 20-25 years ago, when we had real debates and public fights,” he said. “I don’t know if they [the mainstream media – RT] know the truth and therefore are not telling the truth, or that they are just caught up in the myths that had been attached to Russia since the end of the Soviet Union.”
“An orthodoxy about Russia has formed in this country over 20 years,” he added.“And it’s not only wrong, it’s reckless. It led us to this crisis in Ukraine… The only way you can break orthodoxy is with heresy. Some of the things I say are regarded as heretical, treasonous, unpatriotic. But heresy is a good thing, when it’s needed.”
This situation is a sharp contrast to what happens in some other democracies, which don’t hush a public debate on foreign policy issues and don’t try to push opinions not liked by the political establishment into the ‘fringe press’.
“Germany, a relatively new democracy with a past as bad as Russia’s, could develop a democracy, where people can speak openly and feely without fear of failing to get a promotion or getting on an op-ed page. Two of three former German chancellors have blamed Europe for the crisis in Ukraine – not Russia.”
“Where are our former presidents? We know why President Clinton wouldn’t speak out, because he began that policy. But where is President Carter? Where are the former secretaries of state who pursued other policies? Why the silence? We’ve developed, I fear, a political culture within the establishment that is conformist. Even though the penalty of dissent in our country is cheap, unlike in many other countries.”
http://rt.com/op-edge/165932-lincoln-confederates-terrorists-ukraine/