[The Internationalist column published in the The Boston Globe Ideas.]

WHAT HAPPENED IN UKRAINE over the past month left even veteran policy-watchers shaking their heads. One day, citizens were serving tea to the heroic demonstrators in Kiev’s Euromaidan, united against an authoritarian president. Almost the next, anonymous special forces fighters in balaclavas were swarming Crimea, answering to no known leader or government, while Europe and the United States grasped in vain for ways to influence events.

Within days, the population of Crimea had voted in a hastily organized referendum to join Russia, and Russia’s president, Vladimir Putin, had signed the annexation treaty formally absorbing the strategic peninsula into his nation.

As the dust settles, Western leaders have had to come to terms not only with a new division of Ukraine, but its unsettling implications for how the world works. Part of the shock is in Putin’s tactics, which blended an old-fashioned invasion with some degree of democratic process within the region, and added a dollop of modern insurgent strategies for good measure.
Vladimir Putin at the Plesetsk cosmodrome launch site in northern Russia.

But when policy specialists look at the results, they see a starker turning point. Putin’s annexation of the Crimea is a break in the order that America and its allies have come to rely on since the end of the Cold War—namely, one in which major powers only intervene militarily when they have an international consensus on their side, or failing that, when they’re not crossing a rival power’s red lines. It is a balance that has kept the world free of confrontations between its most powerful militaries, and which has, in particular, given the United States, as the most powerful superpower of all, an unusually wide range of motion in the world. As it crumbles, it has left policymakers scrambling to figure out both how to respond, and just how far an emboldened Russia might go.

“WE LIVE IN A DIFFERENT WORLD than we did less than a month ago,” NATO Secretary General Anders Fogh Rasmussen said in March. Ukraine could witness more fighting, he warned; the conflict could also spread to other countries on Russia’s borders.

Up until the Crimea crisis began, the world we lived in looked more predictable. The fall of the Berlin Wall a quarter century ago ushered in an era of international comity and institution building not seen since the birth of the United Nations in 1945. International trade agreements proliferated at a dizzying speed. NATO quickly expanded into the heart of the former Soviet bloc, and lawyers designed an International Criminal Court to punish war crimes and constrain state interests.

Only small-to-middling powers like Iran, Israel, and North Korea ignored the conventions of the age of integration and humanitarianism—and their actions only had regional impact, never posing a global strategic threat. The largest powers—the United States, Russia, and China—abided by what amounted to an international gentleman’s agreement not to use their military for direct territorial gains or to meddle in a rival’s immediate sphere of influence. European powers, through NATO, adopted a defensive crouch. The United States, as the world’s dominant military and economic power, maintained the most freedom to act unilaterally, as long as it steered clear of confrontation with Russia or China. It carefully sought international support for its military interventions, even building a “Coalition of the Willing” for its 2003 invasion of Iraq, which was not approved by the United Nations. The Iraq war grated at other world powers that couldn’t embark on military adventures of their own; but despite the irritation the United States provoked, American policymakers and strategists felt confident that the United States was obeying the unspoken rules.

If the world community has seemed bewildered by how to respond to Putin’s moves in Crimea over the last month, it’s because Russia has so abruptly interrupted this narrative. Using Russia’s incontestable military might, with the backing of Ukrainians in a subset of that country, he took over a chunk of territory featuring the valuable warm-water port of Sevastopol. The boldness of this move left behind the sanctions and other delicate moves that have become established as persuasive tactics. Suddenly, it seemed, there was no way to halt Russia without outright war.

Some analysts say that Putin appears to have identified a loophole in the post-Cold War world. The sole superpower, the United States, likes to put problems in neat, separate categories that can be dealt with by the military, by police action or by international institutions. When a problem blurs those boundaries—pirates on the high seas, drug cartels with submarines and military-grade weapons—Western governments don’t know what to do. Today, international norms and institutions aren’t configured to react quickly to a legitimate great power willing to use force to get what it wants.

“We have these paradigms in the West about what’s considered policing, and what’s considered warfare, and Putin is riding right up the middle of that,” said Janine Davidson, a senior fellow at the Council on Foreign Relations and former US Air Force officer who believes that Putin’s actions will force the United States to update its approach to modern warfare. “What he’s doing is very clever.”

For obvious reasons, a central concern is how Putin might make use of his Crimean playbook next. He could, for example, try to engineer an ethnic provocation, or a supposedly spontaneous uprising, in any of the near-Russian republics that threatens to ally too closely with the West. Mark Kramer, director of Harvard University’s Project on Cold War Studies, said that Putin has “enunciated his own doctrine of preemptive intervention on behalf of Russian communities in neighboring countries.”

There have been intimations of this approach before. In 2008, Russian infantry pushed into two enclaves in neighboring Georgia, citing claims—which later proved false—that thousands of ethnic Russians were being massacred. Russia quickly routed the Georgian military and took over Abkhazia and South Ossetia. Today the disputed enclaves hover in a sort of twilight zone; they’ve declared independence but were recognized only by Moscow and a few of its allies. Ever since then, Georgian politicians have warned that Russia might do the same thing again: The country could seize a land corridor to Armenia, or try to absorb Moldova, the rest of Ukraine, or even the Baltic States, the only former Soviet Republics to join both NATO and the European Union.

Others see Putin’s reach as limited at best to places where meaningful military resistance is absent and state control weak. Even in Ukraine, Russia experts say, Putin seemed content to wield influence through friendly leaders until protests ran the Ukrainian president out of town and left a power vacuum that alarmed Moscow. Graham, the former Bush administration official, said it would be a long shot for Putin to move his military into other republics: There are few places with Crimea’s combination of an ethnic Russian enclave, an absence of state authority, and little risk of Western intervention.

The larger worry, of course, is who else might want to follow Russia’s example. China is the clearest concern, and from time to time has shown signs of trying to throw its weight around its region, especially in disputed areas of the South China Sea. But so far it has been Chinese fishing boats and coast guard vessels harassing foreign fishermen, with the Chinese navy carefully staying away in order not to trigger a military response. For the moment, at least, Putin seems willing to upend this delicately balanced world order on his own.

THE INTERNATIONAL community’s flat-footed response in Crimea raises clear questions: What should the United States and its allies do if this kind of land grab happens again—and is there a way to prevent such moves in the first place?

“This is a new period that calls for a new strategy,” said Michael A. McFaul, who stepped down as US ambassador to Russia a few weeks before the Crimea crisis. “Putin has made it clear that he doesn’t care what the West thinks.”

So far the international response has entailed soft power pressure that is designed to have an effect over the long term. The United States and some European governments have instated limited economic sanctions targeting some of Putin’s close advisers, and Russia has been kicked out of the G-8. There’s talk of reinvigorating NATO to discourage Putin from further adventurism. So far, though, NATO has turned out to be a blunt instrument: great for unifying its members to respond to a direct attack, but clumsy at projecting power beyond its boundaries. As Putin reorients away from the West and toward a Greater Russia, it remains to be seen whether soft-power deterrents matter to him at all.

Beyond these immediate measures, American experts are surprisingly short on specific suggestions about what more to do, perhaps because it’s been so long since they’ve had to contemplate a major rival engaging in such aggressive behavior. At the hawkish end, people like Davidson worry that Putin could repeat his expansion unless he sees a clear threat of military intervention to stop him. She thinks the United States and NATO ought to place advisers and hardware in the former Soviet republics, creating arrangements that signal Western military commitment. It’s a delicate dance, she said; the West has to be careful not to provoke further aggression while creating enough uncertainty to deter Putin.

Other observers in the field have made more modest economic proposals. Some have urged major investment in the economies of contested countries like Ukraine and Moldova, at the scale of the post-World War II Marshall Plan, and a long-term plan to wean Western Europe off Russian natural gas supplies, through which Moscow has gained enormous leverage, especially over Germany.

Davidson, however, believes that a deeper rethink is necessary, so that the United States won’t get tied up in knots or outflanked every time a powerful nation like Russia uses the stealthy¸ unpredictable tactics of non-state actors to pursue its goals. “We need to look at our definitions of military and law enforcement,” she said. “What’s a crime? What’s an aggressive act that requires a military response?”

McFaul, the former ambassador, said we’re in for a new age of confrontation because of Putin’s choices, and both the United States and Russia will find it more difficult to achieve their goals. In retrospect, he said, we’ll realize that the first decades after the Cold War offered a unique kind of safety, a de facto moratorium on Great Power hardball. That lull now seems to be over. 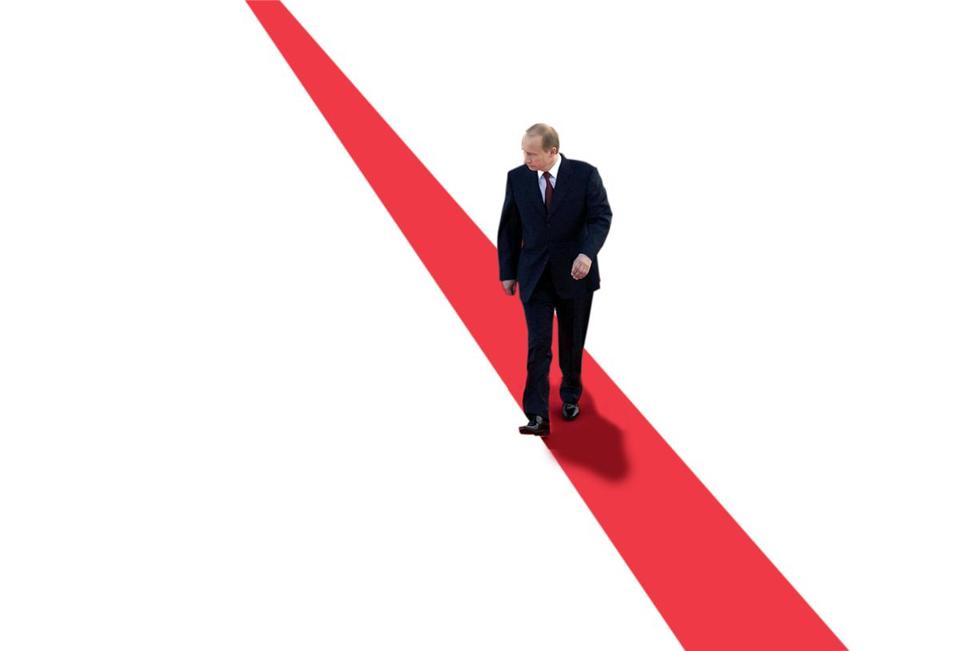