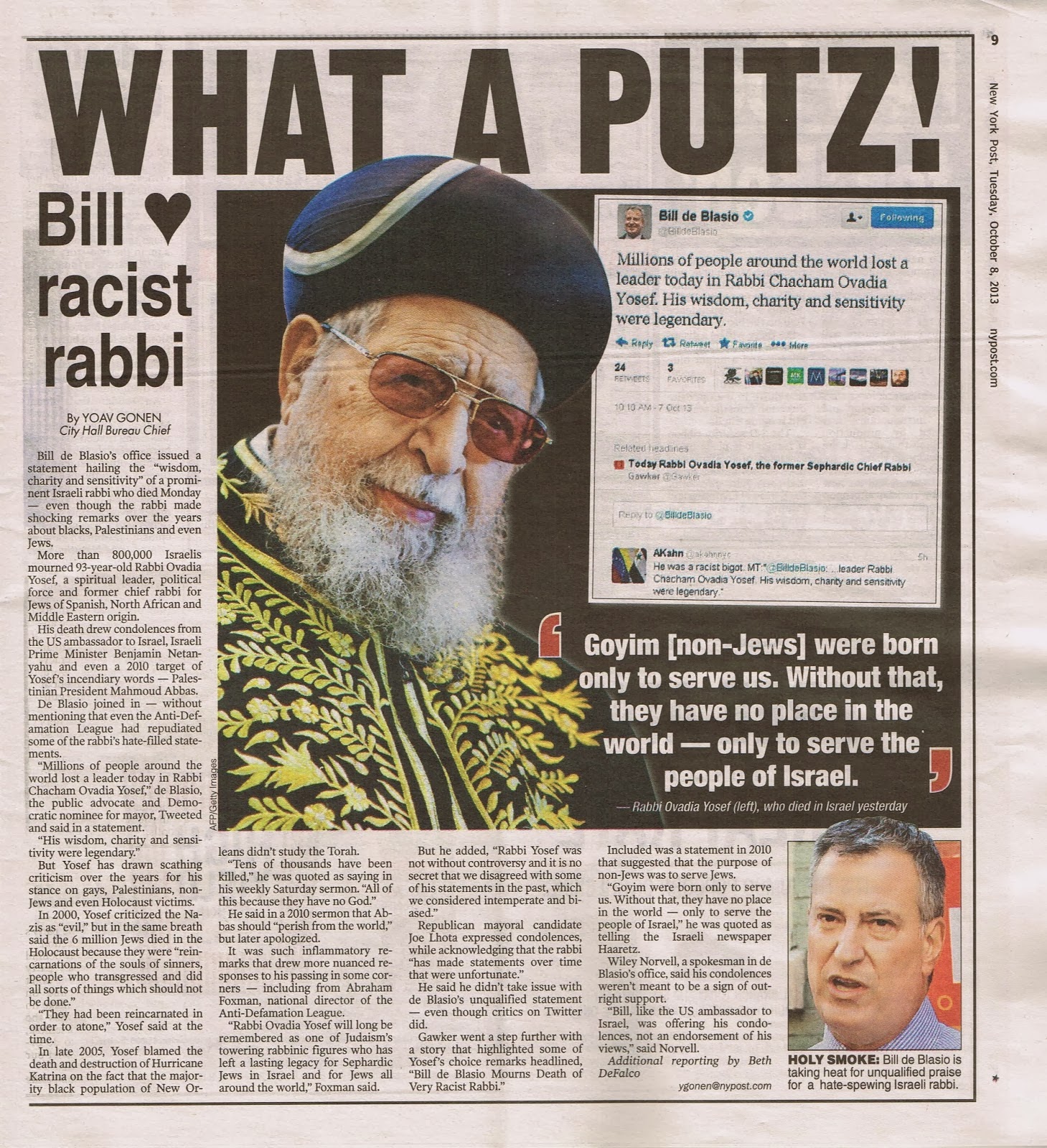 Bill de Blasio praises hateful rabbi
Bill de Blasio’s office issued a statement hailing the “wisdom, charity and sensitivity” of a prominent Israeli rabbi who died Monday — even though the rabbi made shocking remarks over the years about blacks, Palestinians and even Jews.
More than 800,000 Israelis mourned 93-year-old Rabbi Ovadia Yosef, a spiritual leader, political force and former chief rabbi for Jews of Spanish, North African and Middle Eastern origin.
His death drew condolences from the US ambassador to Israel, Israeli Prime Minister Benjamin Netanyahu and even a 2010 target of Yosef’s incendiary words — Palestinian President Mahmoud Abbas.
De Blasio joined in — without mentioning that even the Anti-Defamation League had repudiated some of the rabbi’s hate-filled statements.
Modal Trigger
Bill de Blasio’s camp called Rabbi Ovadia Yosef’s wisdom, charity and sensitivity “legendary.”
Photo: Kena Betancur/Getty Images
“Millions of people around the world lost a leader today in Rabbi Chacham Ovadia Yosef,” de Blasio, the public advocate and Democratic nominee for mayor, Tweeted and said in a statement.
“His wisdom, charity and sensitivity were legendary.”
But Yosef has drawn scathing criticism over the years for his stance on gays, Palestinians, non-Jews and even Holocaust victims.
In 2000, Yosef criticized the Nazis as “evil,” but in the same breath said the 6 million Jews died in the Holocaust because they were “reincarnations of the souls of sinners, people who transgressed and did all sorts of things which should not be done.”
“They had been reincarnated in order to atone,” Yosef said at the time.
In late 2005, Yosef blamed the death and destruction of Hurricane Katrina on the fact that the majority black population of New Orleans didn’t study the Torah.
“Tens of thousands have been killed,” he was quoted as saying in his weekly Saturday sermon. “All of this because they have no God.”
He said in a 2010 sermon that Abbas should “perish from the world,” but later apologized.
It was such inflammatory remarks that drew more nuanced responses to his passing in some corners — including from Abraham Foxman, national director of the Anti-Defamation League.
“Rabbi Ovadia Yosef will long be remembered as one of Judaism’s towering rabbinic figures who has left a lasting legacy for Sephardic Jews in Israel and for Jews all around the world,” Foxman said.
But he added, “Rabbi Yosef was not without controversy and it is no secret that we disagreed with some of his statements in the past, which we considered intemperate and biased.”
Republican mayoral candidate Joe Lhota expressed condolences, while acknowledging that the rabbi “has made statements over time that were unfortunate.”
He said he didn’t take issue with de Blasio’s unqualified statement — even though critics on Twitter did.

Millions of people around the world lost a leader today in Rabbi Chacham Ovadia Yosef. His wisdom, charity and sensitivity were legendary.